As I mentioned in the last update, we inspected the bees on St. Patrick’s Day. It seemed like a warm day then but the past few days have been record setting (80F! in March!) and the bees have been loving every minute of it.

Our first step was to remove the ty-vek wrap that’s been in place all winter. With March sun the bees don’t really need the black anymore, and it prevented us from being able to inspect both boxes. As a meteorologist I am super skeptical that this heat will last and have carefully kept the ty-vek in case we need it for another April Fool’s Day snowstorm.

The bees are still working on their sugar, which is a good sign. Bees prefer their natural honey, but will eat sugar to build up if they need it. So it was good to see some eaten as the colony builds up, but equally good to see that they have not eaten it all, indicating plenty of honey stores still. 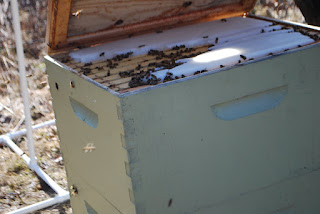 We decided to pull a few frames from the top box to see how things were going. The edge one was pretty much empty- as is to be expected. 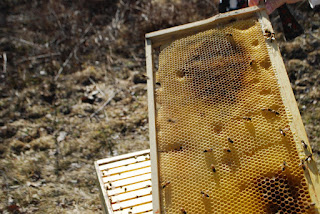 We did find some good news in one of the center frames though – eggs! Those small white dots are evidence the queen is there and the colony is getting going for spring. 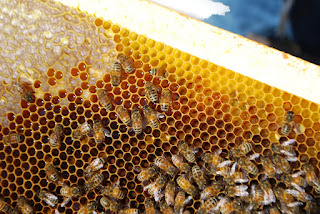 Later when we went back to swap the boxes I saw the queen- but we didn’t have the camera.

After finding this we took a quick look through the bottom box. It had around 3-4 frames of bees and even a small bit of new honey.

We initially decided not to swap the two boxes – a typical spring protocol – in the interest of making informed decisions. After closing the hive and consulting our various bee books and internet sources we realized that a spring swap was well in order. Over the winter the bees eat their way into the top box. They won’t store honey below them so in order to prevent them from deciding they are out of space and swarming (the usual spring activity in nature), we put the currently top and more full box on the bottom. This gives them a mostly empty top box to expand into and start putting up honey. The swap should occur when “the bees decide it’s spring” according to our reference. i.e. when they start flying and collecting pollen, regardless of calander date. Bee spring has arrived and we went back on Tuesday and swapped the boxes.

So far we have seen lots of pollen going in. Pollen is protein and excellent for new bees. Some of it is coming from our crocuses which erupted this week, although I think there must be other sources as I do not think we have enough tiny crocuses to create the amount of pollen I have seen. 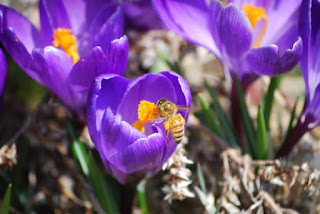 I took about a million of these bees-on-crocus shots. Who could resist my favorite insects on my favorite color flowers? While this one is my favorite it is still slightly out of focus. The bees are, well, busy and don’t like to stay still long enough for you to keep them in the shallow depth of field of the zoom lens. 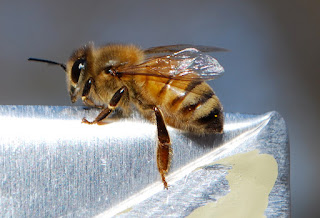 Patient Rob gets this weeks photography award. He sat with the tripod and waited for a bee to get perfectly into his shot on top of the hive. You can really see all the hairs and antenna so clearly! Apparently bees even have special hairs for cleaning their antenna, but I’ll let the photographer explain that one later.

As a final note, if you are not overloaded, we took video again of this inspection and just need to pick out the perfect “music to buzz to” before we post it. I do think the videos are a lot of fun but they are certainly much more post-processing work than photos. At some points I just want to get into the bees and forget the camera/iphone/tripod shenanigans. And so that was in fact what we did 2 days after this inspection in our box swap. Open the hive, quick look, spy queen, swap boxes, done. But no proof for the internet. You’ll just have to take our word for it.

One thought on “When irish bees are flying…”