As a beekeeper, winter is just one long, tense waiting game. You have given the bees all you can and it is up to them to do what they do naturally, huddle together and keep warm.  We have had a few chances to check on them. Warmer (above 40) days allow for a quick peak. It is generally best to not disturb the cluster, but I opened them only enough to determine if they had enough food to get through the winter.

I did our first winter check on Jan 14.  This is early – typically Feb 15 should be the first check, but I knew that at least one of the hives was very likely to need extra food, so when we hit a record-setting High of 59F, I was ready with 5lbs of fondant all made. It was good I checked, as the hives did need food, but not the ones I was expecting. The original hive, which has wintered once before, was already into the top box and staring up at me so I put a chunk of fondant on them. The middle hive was not only staring up at me, but clinging to the inner cover.  This hive was weakest going into winter, so I was not suprised to need to give them some food.  The final hive was still deep in the box – but made it clearly known to me there were there by flying right out and into my face as soon as I tried to look at them.

I was glad I was able to feed them, but I wasn’t sure how much they would eat. A check on Jan 20 revelaed a 2″ hole in the middle of the fondant. I have since realized that it would be best to feed once and feed a large chunk. I ended up opening the two hives I was feeding again later to check on their foodstores. They had eaten quite a bit by Feb 4, and I was unable to add more food on top of the bees, only to the side, since I didn’t want to squish them. Lesson learned. if you need to feed, feed a lot.

Good news is everyone was still alive on Feb 15.  I have not been able to check on them since as we’ve had several storms. We saw dead bees and signs of life post-blizzard from all hives, but I am a bit worried today that only one hive shows signs of life after the most recent storm.  It is still fairly cold and overcast though, so hopefully the other two are just waiting for better conditions.  Here are the bees on Feb 15. 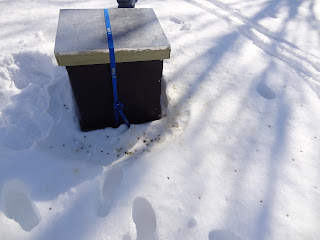 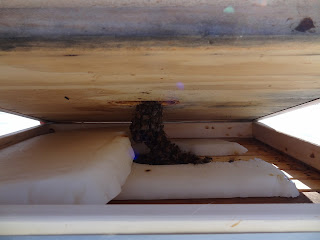 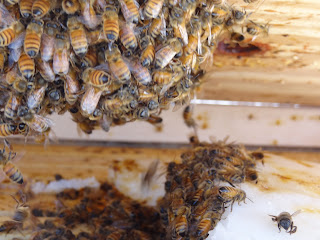