I checked the bees on April 4 while Rob was out of town. They were truckin’ right along. After our week of warmth in March it cooled off to more seasonable temperatures, and I wanted to make sure they still had food. Sure enough there was still a bit of the fondant candy left: 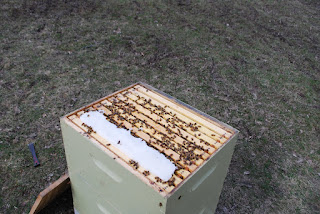 There were 8 full frames of bees in the top box – which seemed to be getting a little crowded to me. Since I was by myself I didn’t check the bottom box (I have a hard time moving full bee boxes on my own – they are heavy!) But my gut reaction was that the bees were building up that fast. i.e. fast enough that they now had 8 full frames on top (as opposed to them just having moved upwards after we swapped them the other week)

One of the challenging things about keeping bees is you don’t really have much control over them. We call ourselves ‘beekeepers’ but really the bees do what they want and we just provide a nice box and steal their honey. There’s only a few fundamental things you can give to bees: space and food (and in winter, some tyvek). Since this inspection had determined there was pleanty of food, I went with space and added a super. It seemed pretty early in the year- supers are usually added for large honey flows, but as I said, you only have two options, so I went with space. 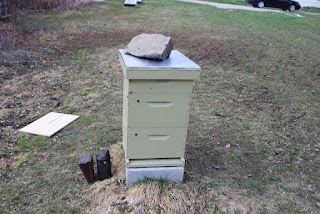 Later in the week I went up to get another hive for our 2(!) new colonies that were arriving on April 15. I chatted with Rick and he confirmed that it was a bit early for a super – although no point un-doing it now. He also pointed out that it is called a HONEY super because they usually put honey it in. Supers will not prevent bees from swarming. What will prevent swarming is fewer bees. We have a plan to make that happen. After we get our two new hives established we will add some capped brood from this hive to each of them. This will serve two purposes. It will give the new hives a 14 day head start since they will have capped brood immediately AND it will give the old hive fewer bees.

Next up: the new hives!