After I got back from Colorado, we checked the bees again this last Tuesday, the 28th. One of the other issues we’ve been encountering on our latest hive inspections is – the amount of bees! Our hive is strong, and there’s probably around forty thousand bees in there. By the time we get to the bottom hive body there’s so many bees covering the frames they’re difficult to manipulate. In our next inspections we’ll start with the bottom box and work our way up, in that way we hope to get a more even distribution of bees in the hive. In this hive inspection, we saw good brood patterns, a few deep frames of well capped honey,and three queen cells on the bottom of the frames. We placed a sticky board under the screened bottom board, to do a mite count. 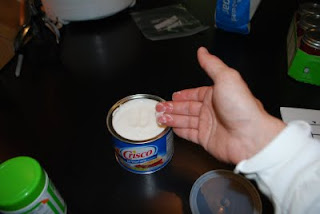 Crisco to make the Sticky Board – sticky. 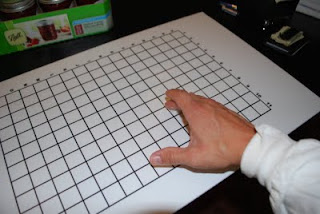 Spreading the crisco on the board. 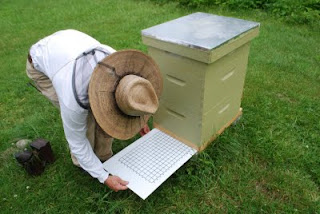 Placing the sticky board under the hive.

I got stung twice, once during, and once after the inspection. This led to pretty good (and unpleasant) swelling of the top of my right hand and forearm – all the itching caused me to be up most of the night after the sting, and left me feeling not to sharp for the next couple of days, not to mention the benadryl. Luckily, this was a bad localized reaction, and not a systemic reaction (as I didn’t have a rash anywhere else on my body or trouble breathing). A search of this on beesource.com showed me that this is common especially in new beekeepers, and beekeepers who are working their hives for the first time in the spring. As of today, my hand and forearm have recovered from the swelling, although the back of my forearm and the little finger/ulnar side of the forearm still itches a little. This also made me realize that we shouldn’t wear our wedding rings during hive inspections – it wouldn’t be any fun having to have ’em cut off in a ER because of swelling. 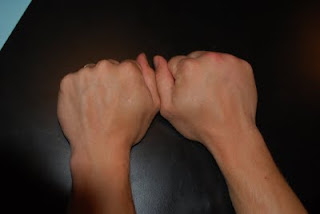 My right hand around five or six hours after the stings. 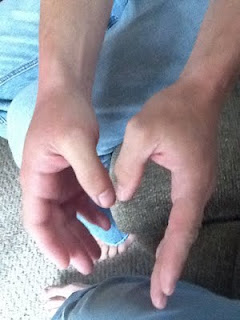 A different view of the stings 24 hours later.

I talked with our beekeeping mentor, Rick; and he did say that there seemed to be a bit of swarming going on in other customer’s hives, but that it seemed like it was about two weeks late. Rick said that we might put the shallow super in between our two deep hive bodies to try to convince the bees that they really do actually have more space, and that they don’t need to swarm. We took his advice, and yesterday, Saturday the 2nd, we did a quick change in the hive bodies. No stings this time, the change went really smoothly.

Recently I’ve noticed our girls expelling baby drones from the hive; Margaret and I weren’t sure exactly why they were doing this. But we’d heard that bees will get rid of sick brood, so we assumed that these guys were sick or had Varroa Mite. And it turns out that they did! I watched our girls pull a newly hatched drone out of the hive, he had two mites crawling on him! Our sticky board mite count was 33 mites in 5 days, giving us a total of 6.6 mites/day for the average natural mite fall. The literature says the threshold for needing to intervene to control Varroa is 50 mites per day in the fall, so our hive is way below that – but we’ll keep an eye on it. I should also note that when speaking with Rick, he said we shouldn’t really be concerned with controlling Varroa until our second year. 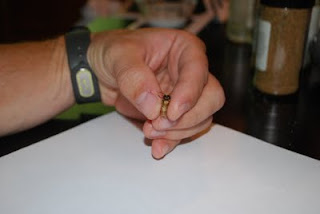 Two mites on a drone that was expelled from the hive. Zoom the picture and look right underneath the eyes.

I scraped these mites off of the drone, and onto a sheet of paper to take pictures of them – which didn’t turn out very clear. Trying to do that reinforced in me why these guys are such a pain in the but! It took me ten minutes to brush them off of this bee, they clung to him very tenaciously. They didn’t live long off of the drone bee, after three hours they were dead.

Our next priority is now to watch for swarms, and be prepared to catch ’em if we can! 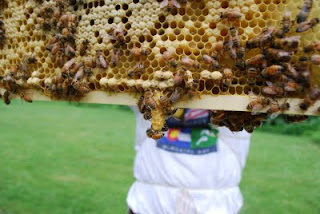