I didn’t post to the blog the day of my third inspection. I was disappointed in how my photos had turned out. A few days before I was experimenting with catching bees on film in mid-flight as they came in for a landing on the bottom board, and when I took pictures of my bees for this hive inspection, I had inadvertently left the ISO on the highest speed possible – which means that my photos are grainy as possible. Sorry about the photo quality.

I finally got up the gumption to post when Margaret looked at my photos, and with some disappointment in her voice said, “These are neat Rob, too cool to not post, you need to do some writing!” And, even though they aren’t as nice as some of the other pictures we’ve had up, they are cool to see.

This last week, Margaret was on a work trip, so I called up Thom to help me with the hive inspection. I thought Thom might like the chance to work the bees, so I passed the hive tool and bee brush off to him, while I sat back with my camera and took pictures. Thanks for doing all the hard work Thom!

Here’s what we saw: 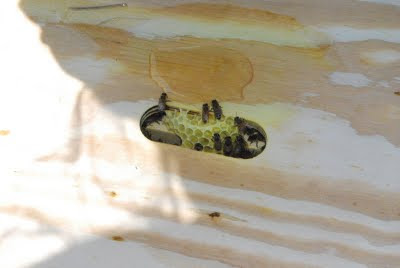 The bees rebuilt the bur comb on the inner cover underneath our feeder pail. When I put the pail on last week, I had mixed up a slightly more dilute sugar syrup than usual. For spring feeding, bees are given a one to one by weight (water : sugar) solution to help them build up honey comb on the frames; the feeder pail we have holds ten pounds of sugar syrup. When I mixed up our syrup last week, I found that we only had about 4 and a half pounds of sugar (Doh!), so it ended up being a little less viscous than the normal mixture, and you can see the results pooled on the inner cover. That said, I think the bees have been building bur comb on the inner cover, under the feeder pail, to arrest the slow drip of syrup onto their heads. This is just a suspicion, but if you look in the picture how they built it, on the side where the syrup flows through the feeder pail mesh, then this makes sense. Not too mention that we saw bees sipping from the open bur comb – which you can also see in the picture. We did, however, remove this comb because the bees had attached it to the frame and we don’t want them building brace comb between the frames.

We also saw that our bees were capping over brood normally with the oval shaped brood pattern in the center, surrounded by bee bread and honey in the outside corners. 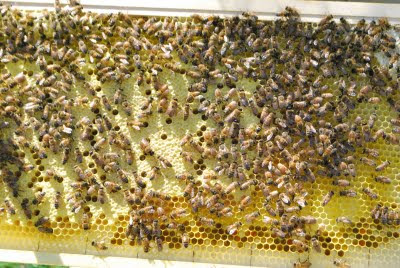 Over capped brood, with a line of pollen (“bee bread”). 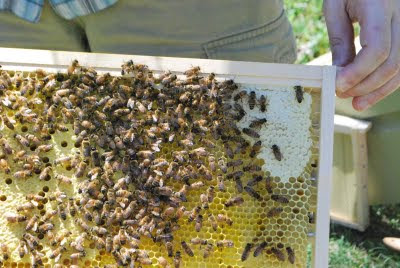 Capped honey on the same frame.

We also saw good evidence of a hatch, in these photos the darkening of the comb can be seen due to a pupal lining or cocoon being left in the brood cell. There’s a lot of new bees from this frame! 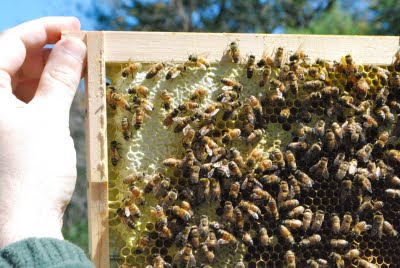 Darkened comb from a hatch, with capped honey on the outside.

It turns out that the bees will clean and smooth the inside of the brood cell, add wax and silk, all after a new bee has hatched – and that increases the tensile and shear strength of the comb. The incorporation of pupal cocoons into the comb cell allows the comb to be less heat sensitive, and therefore less likely to collapse with the bees on it or honey and brood in it on a very hot day. 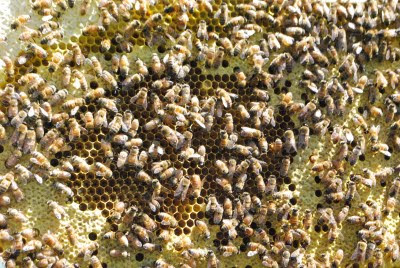 Can you spot the drone cell near the top center of the newly hatched broodcomb? We also saw a few drone cells either capped over, or being formed like this one.

There were some frames that I was unsure about if they contained brood or honey, it’s a little hard to tell since our bees seem to make brood cappings that are very light colored like this one. 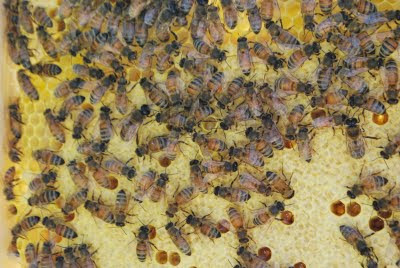 You can also see a couple of uncapped drone cells near the center of the frame on this one.

And here is one of my (best) attempts at capturing bees in flight! If anyone has any advice on how to get bees in flight let me know, my plan was tiny aperture, large depth of field and high ISO, but that’s how this turned out! 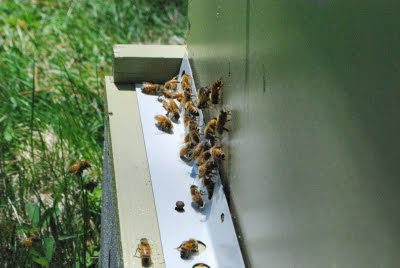 Coming in for a landing!

Let me say Thom has the patience, and mindfulness of a Shaolin monk. He only wanted a bee veil and hat while working the bees, and was wearing shorts – which one of the bees crawled up. He glanced at me, while I was in the middle of my photography, and said, “One’s crawled up my thigh.” Then he went back to minding the frame he was holding. After we had closed up the hive, I asked Thom if he’d been stung, and he hadn’t. Good on ya Thom! I don’t know if I could have kept my cool. 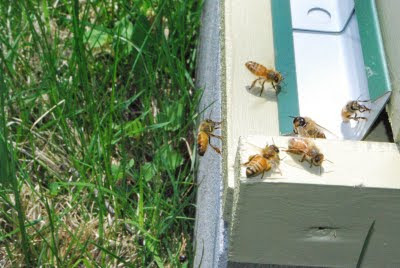 Bees fanning the hive after the inspection.