Well it’s been a busy month, both us and the bees have moved! I was a bit intimidated about moving the bees.  I’m no migratory beekeeper and I don’t have any forklift so we did the best thing to do whenever you have a large task that you don’t know how to accomplish- procrastinated and looked it up on the internet!  The procrastination worked out alright, as we were able to collect the tools, trucks, and nerve to move them 2 days before our lease ran out.  As far as internet tips go, my favorite was this pamplet from the mid-atlantic extension office. If offered a few tips I hadn’t thought of (leave the truck running as bees find the shaking calming. just like you and I like to fall asleep in moving vehicles). As well as a few obviously learned-from-experience tidbits like “Be sure the vehicle is road-worthy. Tires, fan belts, etc. should be checked in advance. Being stranded is extremely unpleasant, and tow trucks and mechanics are reluctant to assist vehicles loaded with bees ”

We enlisted the help of a second truck and helper (my Dad) and went off to get the hives. 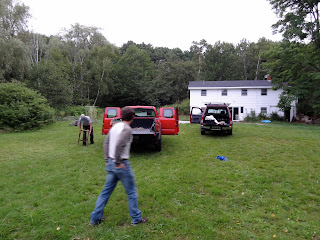 We had two trucks, some bee netting and a special contraption to help lift the hives courtesy of a friend in New Hampshire.  When we got there initially the bees were still flying, so we had some time to plan out the move.  Mostly the plan consisted of “cover the entrance, strap the layers together, lift the hive, repeat 3 times, then cover with netting and drive off”. Below Rob and Dad discuss the plan. 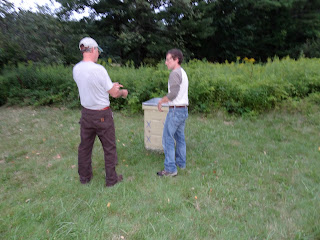 We lit the smoker (pine needles make great smoke!) and put on our bee clothes to get ready to move. 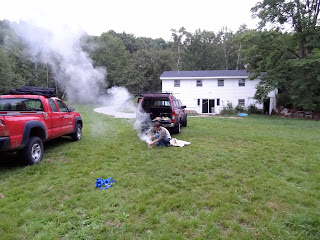 Here is the contraption we used to move the hives.  It doesn’t look like much, but was really quite helpful. It had a metal frame that would hook on the edge of the hive handles and then allowed a pair of people to use leverage and move the whole hive.  They were certainly heavy with honey! 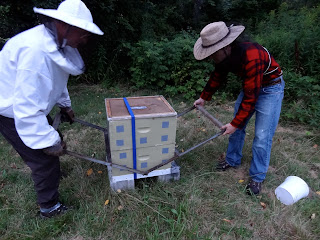 Before we lifted the hives we covered the entrances with screen. Bees can actually eat through this type of nylon screen so in general you should use wire screen for bees (although they can’t eat through it in the time it took us to move them, it would take several days for them to eat through).  We used a combination of duct tape and staples to hold the screen on. Duct tape was easier to take off, but the staples hold better. 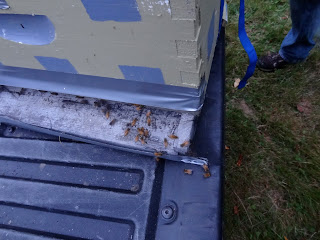 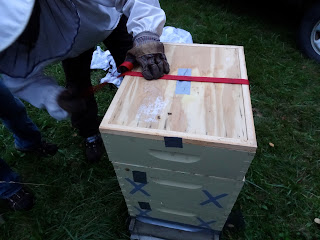 All that’s left to do is load them on the truck. We did tie down the hives, but mostly they were so heavy and we drove so slowly that it didn’t make a big difference. (While I have seen bees on I-295, we took the back way so we could stay at about 35mph) 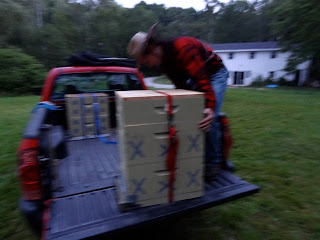 While it seemed light when we started, it’s a good thing we started when we did (about an hour before sunset) because by the time we got to the new house it was dark. We were able to unload, although headlamps and bee headnets are a sort of awkward combination; I’m sure there’s some trick to it we haven’t mastered yet. 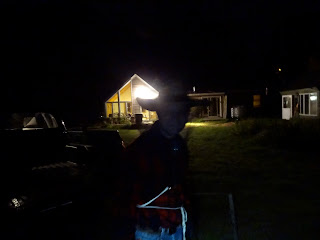 Here we all are, the beekeepers and the bees happily in their new home! 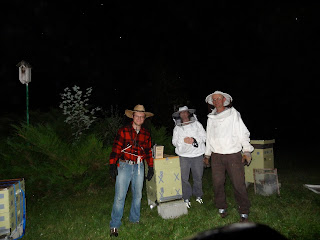 One thought on “Moving Day!”