Last Saturday Margaret and I, along with Thom went to Rick’s house, and picked up our packaged bees. Rick and his wife drove all the way down to Georgia, to pick them up from his supplier there, loaded them up in a 6×12 Uhaul trailer, and drove from Georgia pretty much nonstop until they were in Maine. After he had sold all of the packages to his customers, he did a demonstration on how to install a package, and set us loose to install packages in his bee yard.

Thom, Margaret and I watched again as one of the experienced couples in the class installed a package. We then installed another package, and I had some trouble getting the cork out of the candy opening in the queen cage with the hive tool. I put the edge of the tool in the cork, but only managed dig a hole in it, and not actually move it at all. I looked at Margaret, while I was still struggling with the cork, a little nervous about the queen’s attendant bees I had in my bare hand, they crawled over my fingers and their little wings vibrated against my palm, I said, “this isn’t working, something pointy-er would be a lot better, like a nail or a pocket knife.” She smiled, and pulled a nail out of the pocket of the pants she had on, “I knew there was a reason I didn’t clean the pockets out of this thing.”, she laughed. With the nail, I was able to get the stubborn cork out of the cage. We shook the bees into the Hive body, put the inner-cover, and outer cover on. 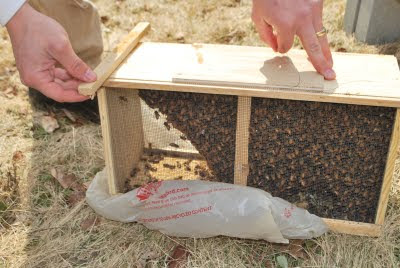 I drove carefully from Rick’s home, and Stacie met us with her video camera at our place. Stacey took this video of the installation:

Not all of the bees went immediately into the hive, as can be see in the video, some were still in the box, and some were still on us! Bees that were still on us after the installation we shook and brushed off. They were surprisingly gentle, we didn’t get stung in the four installations we saw and participated in that day. That includes Thom and Stacey, who didn’t wear anything covering their heads! The bees gentleness is explained by the high cost to a bee in stinging, namely, a sting more often than not kills the bee. Bees typically sting to defend the hive, a cluster of bees without honey or brood to protect are less interested (that is, if a bee can be interested in something) in stinging you. This also explains why wasps, hornets and yellow jackets are such bastards, because they can sting you with impunity, or at least until you smash them with a rock. The greatest risk of the day, in fact, seemed to be bee poo, by the end of four installations we were covered in it! But then, hey if I drove nonstop from Georgia to Maine, I’d probably have to go pretty bad too. 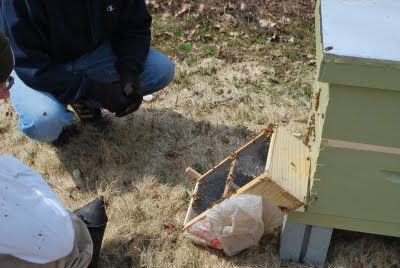 Later in the day, two fist sized clusters of bees formed in the package box, as the it got colder. Figuring that I had bugged these bees enough (I left them shortly in the cold on the hood of our car, droved them 20 miles down the road in the back of the car, Margaret sprayed them with sugar syrup, and I had now personally slammed them on the ground a total of four some odd times) I gloved up, and shook these out onto the ground, then scooped them up in my hands and put them on the hive entrance. 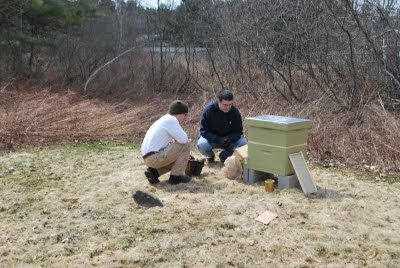 Most of the bees found their way into the hive, and yesterday, the 17th, it was pretty warm, and I saw the bees taking large spiraling orientation flights into the sky, and hovering at the hive entrance. Margaret and I have been visiting the hive to watch the comings and goings there pretty often. There are a small amount of dead bees in front of the hive, maybe 2 to 300 bees, but figuring that the three pound package contains somewhere between 10 to 15000 bees, this isn’t too significant.

Tuesday, I will take a quick look at of queen cage, and release her if needed; then next Friday, we will do our first inspection.