Well it’s been a busy spring with 3 hives. We have 2 more hive inspections to tell you all about. The bees have been doing well. Last weekend, the end of April, 2 weeks after we got the bees we went and did a full inspection of all the hives. Overall everything looks good. Since we were already behind on videos and movies we concentrated on the most important aspect – the bees! Our goal was to find 4 frames of capped brood from the old hive to add to the new hives. Capped brood and the nurse bees that came with it would give our new hives a leg up. We inspected the old hive carefully – even taking notes. The frames were full of bees in both top and bottom, with the outer edges starting to fill with honey in a nice pattern. We found 4 frames of brood and put them in an extra super. We also saw the queen – boy is she big. This gave us confidence that we were not accidentally taking the queen from the hive. Nurse bees are loyal to the brood they are protecting more than the queen. Thus a frame full of nurse bees will transfer to another hive. We checked on each of the two new hives. They are both progressing nicely having drawn out comb, although the bottom box was not yet full. We saw a queen or evidence thereof in both hives. It’s interesting to have two matching hives because they have such different demeanor. It really makes you appreciate how each bee hive is different. The middle hive was very relaxed, the bees hardly seemed to notice us inspecting them. The square hive on the other hand definitely noticed. Not to the point where we couldn’t complete the inspection, but this hive was just more ‘a buzz’ than the X hive. As suggested by Rick we put the 2 new frames of capped brood with nurse bees in the middle of each of the new hives. We then took 2 empty frames from the edges and put them in the old hive on the top outer edges. We gave the new hives a pail of feed each and even gave the old hive a half bucket to get them going on the new comb during what looked to be a rainy week. With dandilions in full bloom I expected the bees to make quick progress on drawing comb and my plan was to check the feed and super the hives on Wednesday, 4 days after the inspection. Between the weather and a very busy week, that didn’t happen. Luckily during the rain bees weren’t out collecting either so overall they were not too far ahead. Yesterday, Saturday May 6 I was greeted by a lot of bees on the outside of the old hive. 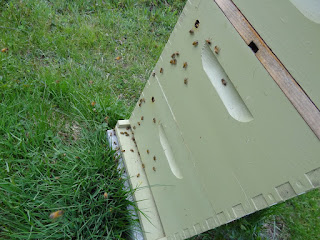 I got the smoker going and cracked open the hive. The new frames were not yet completely drawn out, but it was clear there were more than enough bees. 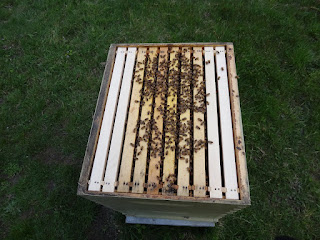 I opted to add a honey super to them. While there is some chance that the bees will build up rather than out or lay eggs in the honey super rather than honey, the amount of bees and availability of pollen made me lean towards more space. The flowering tree in the front of the house is almost out. Last year you could hear the bees when you walked under it while it was in bloom. In a high nectar flow, space is very important so I gave it to them rather than risk it. 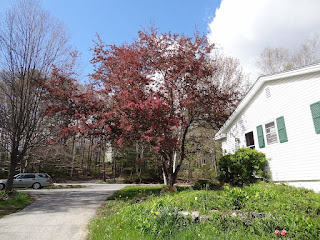 I then went and checked on the other two hives. I did not do a full inspection, just cracked the top for a quick check. Both of these hives looked good as well, although the edge frames were still not drawn out. Once again the difference between the two same-age hives was interesting. The X hive had a bit of sugar syrup left in their bucket, while the square hive had none at all. 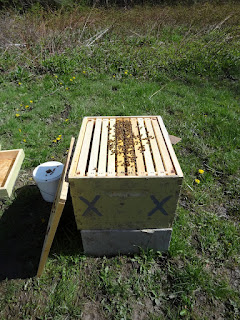 Both had plenty of frames still left to draw out, so those hives have not been supered (instead the hive parts are lying all over the spare room – I can’t wait for a garage!) 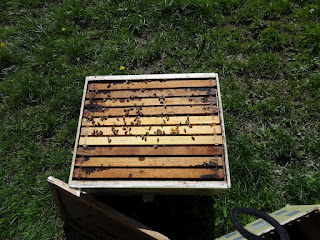 Rob made both newby hives some more sugar syrup today (I still sometimes wonder why I feed bees sugar, but that’s another post) Tomorrow should be sunny and with the dandelions and the flowering trees coming out I think all the frames will get drawn out quite quickly.