Rob rushed home today, at the end of his CNA class clinicals to meet Margaret at home to do their first full hive inspection this Friday evening. He was home by about four PM, and Margaret was waiting excitedly on the house doorstep with the Smoker ready and going, she had gotten all the equipment out, and reminded him to grab the camera from the car. Rushing into the house, Rob changed from his scrubs to his Carharts and longsleeve shirt. It was cool-ish, perhaps right around fifty to fifty three degrees, the bees were settling down for the day, and both Marg and Rob noticed that there weren’t any bees flying in front of the hive. 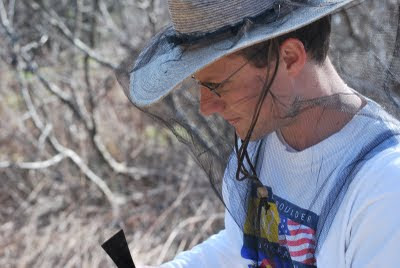 Margaret generously smoked the front of the hive, as Rob lifted the outer cover off of the upper deep box. Then Rob began lifting the feeder pail off of the inner cover, and Margaret smoked the feeder hole, as this was happening, the bees made a loud buzzing sound. Having dropped in to their home unannounced, Marg and Rob decided to give the bees a few minutes to calm down.

Margaret was a little anxious when Rob started messing with the fuel in the smoker (that she had lit perfectly well, thank you very much) and it looked like it might go out. But, Rob managed not to put it out, which was a relief to them both, considering the hive of ten thousand plus bees they were about to open up.

Rob cracked the inner cover open with his hive tool, and Marg smoked the top of the hive frames, the few minutes had calmed the bees down, and now they were making a relaxed happy hum in the hive. 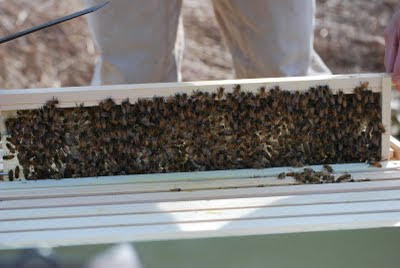 Margaret took pictures as Rob withdrew the first full frame of bees, and they were excited to see that the bees had been busy over the last week festooning the foundation of the hive frames with brand new white wax!

They did not see the elusive queen, but they did see that she had indeed laid eggs in the colony cells, and that the bees had filled some of the uncapped cell with nectar and pollen. 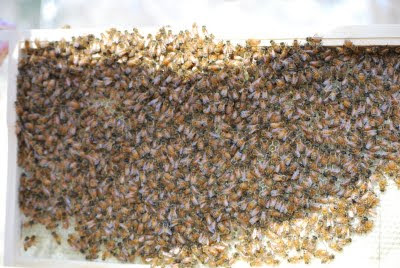 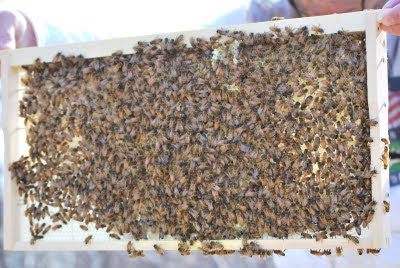 Some bur comb can be seen on the last picture, which was not as bad as it could have been, so it was left for the next inspection in two or so weeks!

Margaret then mixed up some more feeder sugar syrup for the bees, and they placed the refreshed pail on top of the hive and sealed it up.

See you bees in two weeks!