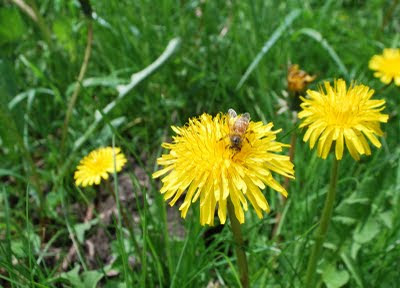 The sun appeared today, and both us and the bees welcomed it after over a week of fog and drizzle. We opened the hive with the hope of seeing how the frames were filling in hopes of being able to add another deep super for the bees to draw out.

The hive was buzzing, with many bees on the outside and lots of flights in and out. Once again we saw some burr comb on the top catching the drips from that pesky feeder pail. 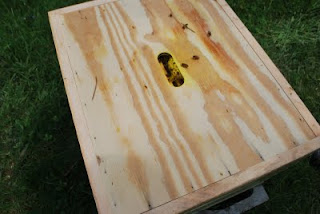 The bees had hatched quite a bit of brood and had a lot of drone cells – not sure how many they should be building, but given that women do the work of the hive I thought it odd there were so many drone cells. The wax was also much more yellow this time than last, presumably the result of the dandelion pollen they were tracking into the hive. 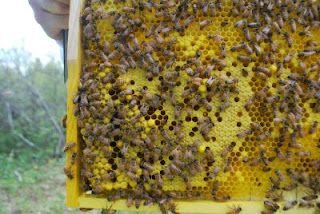 Healthy bees, with the first bees hatched out of the middle. 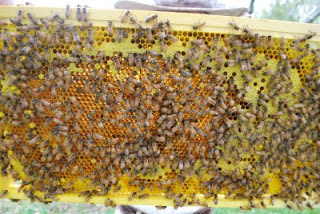 Even a bit of honey in the upper right corner. 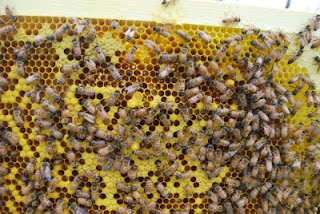 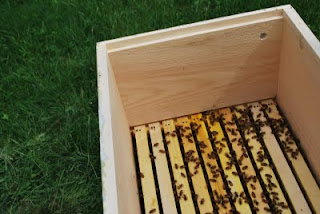 The low point of this insepction was our first two stings, both on Rob’s fingers. Rob squashed a bee with the feeder pail when we first opened the hive, and then two more proceeded to get him back for it. Good news is he had no crazy reaction. It hurt, and wasn’t fun, but we were able to keep going on our inspection. Sorry girls- RIP!