We harvested honey this year from the hive we started last year.  We ended up with a total of 30lbs – not to shabby, although certainly not record.  We were able to use the extractor for the first time as well.

First we cleaned the extractor. 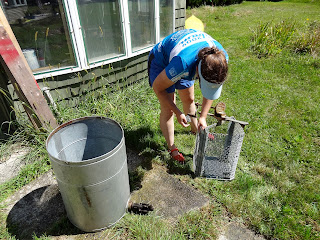 The extractor come from my paternal grandfather – it seems to be in plenty good shape though! 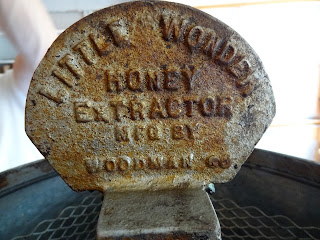 After getting our instruments together we cracked open the hive. 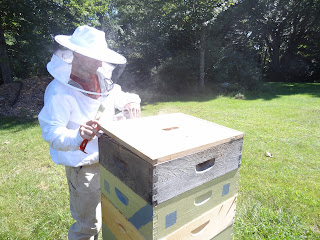 To steal the honey we went frame by frame wrapping each frame up in a towel as we got it bee free with a brush.  This was a two person job.  Clearly folks with more hives have another method, but this seemed to work for us.  Here are all our frames of honey laid out on the table 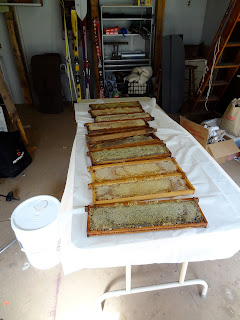 The first step in the honey extraction process is to uncap the frames (aka remove the outer layer of wax which is sealing in the honey) While some folks use an electric heated knife, we elected to just keep pouring hot water over ours.  Rob was much better at this art that I was and after a messy try I ceeded to his mastery. 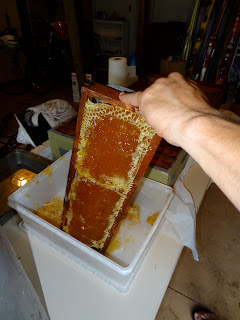 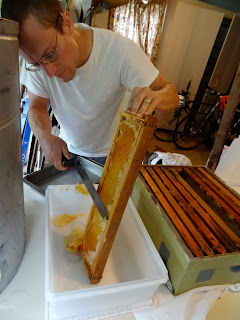 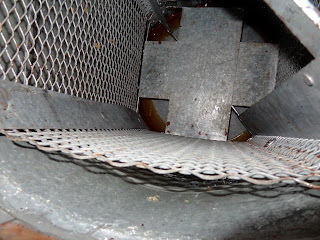 After we were finished extracting all the frames we opened the honey gate at the bottom and the crop flowed into a strainer and honey bucket. It was hard not to want to eat it all right then! 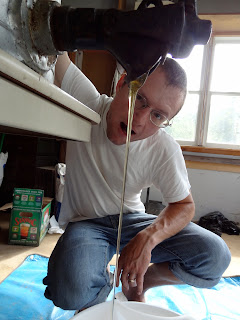 The honey was strained into a large bucket with a honey gate.  A lot of honey that you get at the grocery store is filtered – this involves heating the honey and then forcing it a pressure through a very fine mesh. It removes a lot from the honey, including pollen and some of the parts that provide the distinctive flavors. What we did was just a basic gravity straining which removes any bits of wax or frames or bees which may be in the honey. 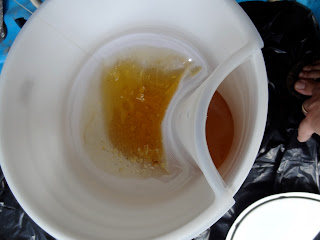 For bottling we brought the bucket inside and put it on the counter.  Just open that honey gate and the beautiful goodness flows into jars! 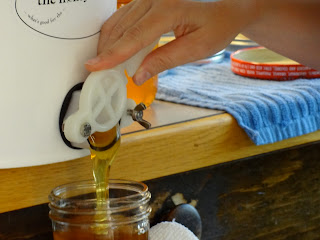 We filled a big 10lb jar as well- lots of honey to go around! 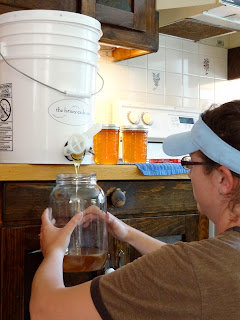 HOw did our honey taste and look – pretty good, and Sandwich Fair judges agreed giving us the First prize in Light Extracted Honey for the second year in a row! 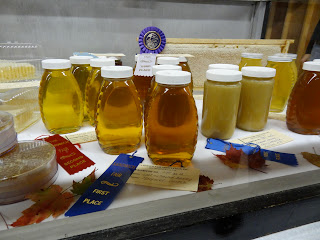