Today, with Thom’s help, I inspected the queen cage.

I was feeling a little anxious about getting into the hive; and I was glad that Thom took the time to come by and give me a hand. I think my anxiety may have been amplified because the skies were a little overcast, there was a small chance of rain in the forecast – and from what I’ve been told – bees don’t like it when you’ve opened up their roof and it’s going to pour. I gave Margaret a call at work, she and Stacie assured me that it wasn’t going to rain anytime soon; so I was able to relax a little bit. It sure is nice to be married to a meteorologist!

We didn’t take any pictures of the activities today, but here’s one of Margaret holding the queen cage during the installation on last Saturday. 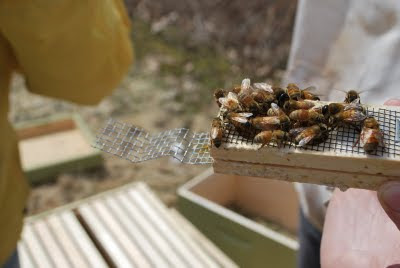 Thom and I got the smoker started, I remembered that I had left my hive tool and pair of pliers in the kitchen; so I ran back to the kitchen while Thom teased me, “Rookie mistake Rob!” When I returned, we removed the outer cover, top deep box and feeder pail. Thom smoked the hive entrance, the upper vent hole, and under the inner cover. We let the hive sit for a few minutes while I collected a few things from our bee stuff. I made sure I had pliers and a bee brush. We then pulled the inner cover off of the Hive, and inspected the queen cage. We were impressed by the amount of bees that clung to the bottom of the inner cover.

Initially it seemed like the bees had released the queen, as we saw one worker bee crawl deep into the candy end of the queen cage. However, once we pulled the cage out we observed that she was indeed still inside. I grabbed my bee brush and carefully brushed the attendant bees off the enclosure, then found my pliers and pulled the wire mesh back from the wooden cage body. The queen dutifully stayed in the hollow of her cell until I brought her down close to the hive, at which point she hopped off and disappeared into the crowd of bees on the frames. Tom found the frame we were unable to leave in the hive body during the installation last Saturday, and placed it in the hive. We then pushed the frames together, and closed up the hive.

I don’t know why I was so anxious today about getting into the hive, it turned out that the bees were still very gentle with us, despite a chance of rain and partly cloudy skies. One alighted on my bare hand, and casually groomed her antenna, before flying off again.

Thom and I watched the entrance for the bees coming and going, we noticed that several were entering the hive with full pollen baskets, and saw maybe three bees fanning the hive entrance on the outside.

This Friday, Margaret and I will do our first Hive inspection, we’ll make sure the queen is doing her job.

Thanks to Thom for all your help!